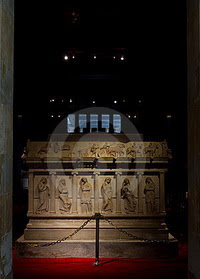 Authored by Panagiotis Traianou
People need to use their heads in order to find it, not their shovels.
The biggest secrets in the world are best hidden when they are in plain view. In order to understand exactly what the case with Alexander’s tomb is, we have to think in the exactly opposite way than the one the system would like us to think. This means that we have to think in the exactly opposite way than we did so far, which did not allow us to really see what most likely is in front of us all the time. We can literally see the tomb in our mind if we close our eyes.
Besides, it is known that people can see things better if they use their mind instead of their eyes. Perfectly sighted eyes can be fooled by an illusion, whereas a great mind cannot.
Perfectly sighted eyes can see an illusionist actually cut a man in three pieces, whereas the mind sees a trick. Perfectly sighted eyes may see palm trees and oases in a desert, whereas a good mind sees them only when they are actually there.


Creator of the Aquarium theory